It wasn't too long ago that I found a package of "monkey socks" for sale at an estate sale we were at.  I had to have them.  They are the type that people make sock monkeys from.  I was very excited and had to tell everyone that would listen to me about my great find.  I don't wear them often because I don't want to wear them out! 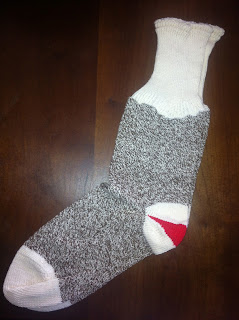 Dan has collected sock monkey's off and on for years now.  The collection grows and then he sells some off or gives them away.  We get down to only a few and then more sock monkeys begin appearing.

What makes each sock monkey unique are their outfits, hair and eyelashes. They all seem to be different.

This little fellow has clothes made for him.  He kind of scares me in an odd way. 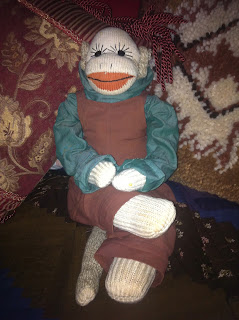 Sock Monkey's were all originally made from socks made by the Nelson Knitting Company and were known for their red heels.  They began manufacturing their red heeled line in 1932.  It was from these red heels that the sock monkeys got their mouths.  There have been many other sock companies that made similar socks since.  Most of the sock monkeys we see today are from the 1950s or from the 1970s when there was a resurgence in the making of sock monkeys!

I think this Mom and baby sock monkey are cute! 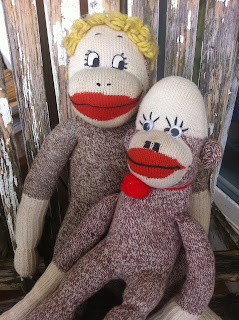 This little guy is all made up.  I think he must be a member of a sock monkey band.  What do you think? 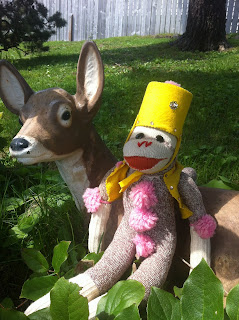 This sweet little girl sock monkey was a gift to me from my friends Debbie and Dorothy.  I had been out of commission for a bit and they sent this over to my home to cheer me up.  It did just the trick!  Thank you Debbie and Dorothy! There is nothing like a sock monkey to cheer you up when you are feeling down. 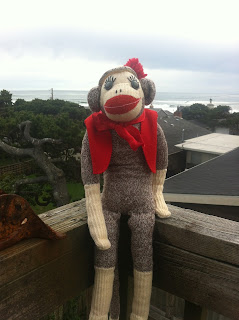 This sock monkey is orphaned and looking for a new home!  He can currently be seen in our Mall.  He looks lonely and I hope somebody else gives him a home before I do. 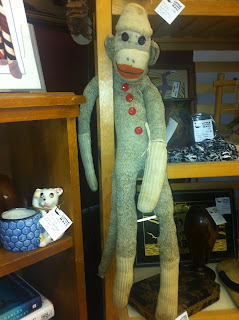 During the Holidays my friend Christine brought me over this new sock monkey! It is huge.  This has to be the biggest sock monkey I have ever seen.  Here he is towering over Buddha.  Buddha is not fearful, however, of this giant, godzilla size sock monkey.  Buddha knows the only way to get through fear is to face it and pass through it. 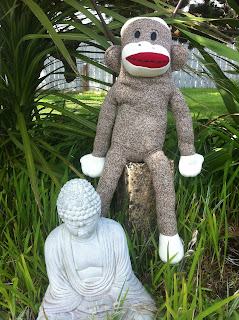 My mother and her friends took the sock monkey idea a bit further.  She made me a sock reindeer about 25 years ago and mailed it to me in San Diego.  It has been with me ever since!  It has become a tradition in my home to hang up the sock reindeer every year during the Christmas Season! 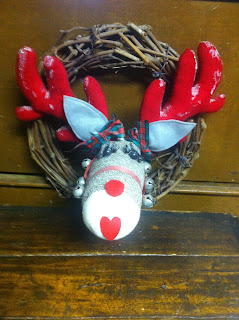 I once saw a sock elephant come into our Mall.  It sold pretty quickly and I regret not buying it.  Sock elephants are pretty rare I think.

I hope you enjoyed the sock monkeys!  Next time you see one stranded somewhere be sure to give it a home.  Give one to a friend.  It just might be what they need to make their day.