We recently blogged about magazines that featured country primitives and antiques.  We mentioned several publications that we missed because they had ceased publishing.   We also was pretty vocal about Country Living that still is in publication and was once considered almost the Holy Grail of country style magazines.

In our blog we stated that we had become weary of the bland, whiteness of Country Living.  We noted that it had been going on for years so we and others have cancelled our subscriptions.  Today we received our last copy in the mail.  It is Country Living's July/August edition.  We present their latest cover to you and we rest our case. 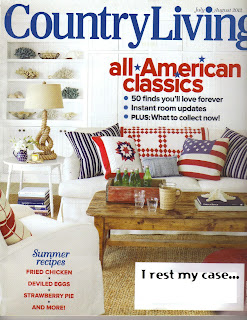 I also have written about sock monkeys and even did an update the other day.  Well here comes another sock monkey report.

Our dear friend Trudy (thank you for reading our blog Trudy) saw the blog on sock monkeys.  She was in very recently and found this sock monkey which had gone undetected in our Mall.  Trudy quickly purchased the sock monkey and gave it to me for my birthday.  I love it and I love Trudy!  Thank you Trudy.  Here is the new edition to our sock monkey family. 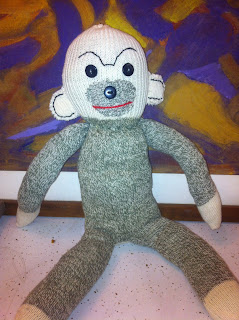 Before leaving work today I noticed that my new sock monkey had teamed up with the sock monkey that resides in our Mall.  You know the one...the one that makes me nervous!  I don't know quite what to make of this new team. 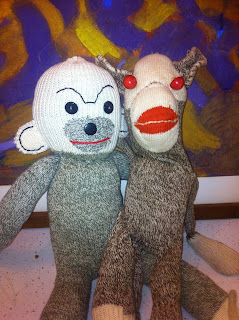 All I can say is that when you come to visit us at the Little Antique Mall know that you are being watched by a couple of sock monkeys.  Always in the background, always present and always watching are those sock monkeys.

Think about it.
Posted by Red Duck Pond"erings" at 7:39 PM 3 comments:

WHAT HAPPENED TO THE GOOD MAGAZINES?

We have been in business on the Central Oregon Coast for almost 21 years now.   From the very beginning my two favorite publications were Country Living and Country Home magazines.  I looked forward to them every month.  They inspired me and educated me on a hobby that we loved so much that we turned it into a business.

In this issue we were so proud to be listed as a resource for one of the homes featured. 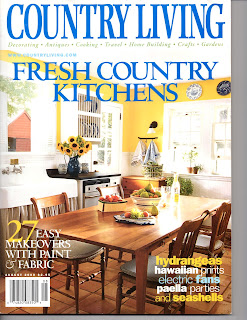 Each issue was filled with early american and country primitives and lots of color.  Country Home was never afraid of color.  In this issue Lincoln City was noted as being one of the Top 10 places in the United States to shop for antiques. "Not Just Another" Little Antique Mall, Inc. was a big reason for that honored designation. 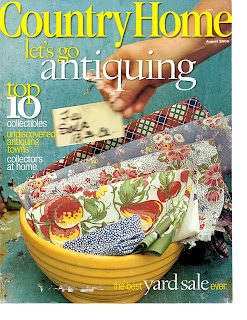 A few years ago we began to notice a change in Country Living.  There was less color and more emphasis on white or pastels. 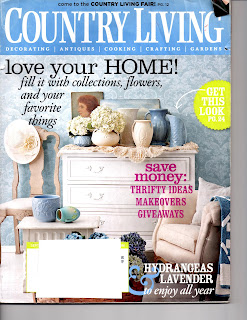 There is nothing wrong with showing whites and less color but it became a common theme for Country Living and that has been ongoing for years now.  In fact it has gone on so long that, to me, each issue looked just like the last.  I cancelled our subscription.  We are not the only ones to do so.  I have talked to several collectors and dealers who have done the same thing.

One of our Antique Dealers, Pam, wrote a note along with her cancellation.  Pam mentioned she had subscribed for 30 years but just couldn't support the magazine any longer.  Last time we spoke she still hadn't received an answer to her letter. 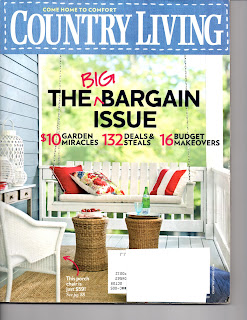 Meanwhile Country Home began showing white walls but they still embraced color.  Early American painted furniture has always been a favorite of ours.  In fact, we have collected it for years. 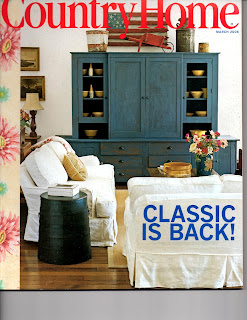 In particular I always looked forward to the Holiday Issues.  I got great Holiday ideas and it just became a part of our Holiday Tradition.  I love this apple wreath. 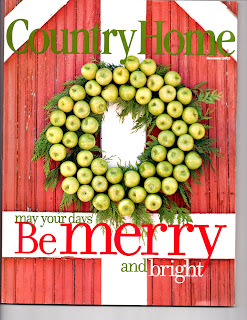 Then the unthinkable occurred. County Home stopped publishing!   The recession has been hard on the magazine industry.  Country Home was a casualty.  It was a sad day when I learned that.  I have kept my old Country Homes and treasure each and every one of them. 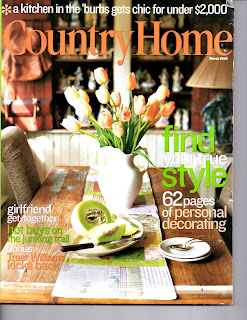 I found Cottage Living.  It showed exteriors and interiors of cottages.  It really featured how to collect and show off your collections in a much smaller space or a cottage space if you will. I enjoyed that very much but then they suffered the same fate as Country Home.  They no longer publish. 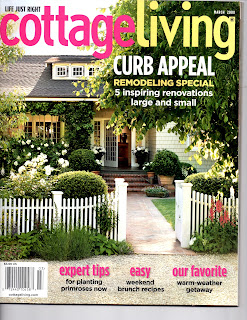 Country Style by Better Homes and Gardens was also interesting and showed color.  They too disappeared. 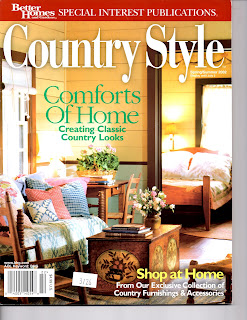 Better Homes and Gardens would issue a "Decorating With Antiques" magazine from time to time.  It also no longer appears.  A relic from the past. 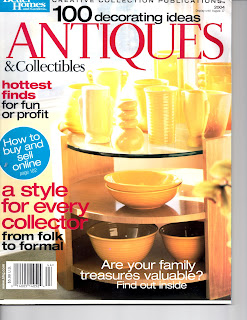 So now I subscribe to Country Sampler.  They offer layouts that reflect good country antiques and they show color.  They also feature a lot of new reproduction collectibles which really aren't my cup of tea. 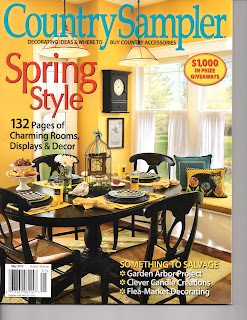 I have also began reading Romantic Country.  They also embrace color and it gives me some great ideas from time to time. 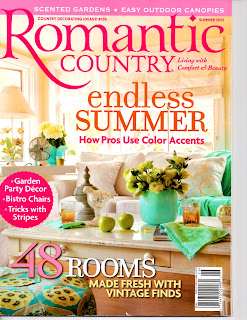 But nothing has really taken the place of Country Home or the older version of Country Living.  I realize there is so much out there on the internet now that magazines have a difficult time competing.  But I guess I am old fashioned.  I still like a magazine.  I like holding it, turning the pages and reading.

I have an iPad, which I dearly love, and I have taken several magazine subscriptions that are delivered on my iPad.  It isn't the same and I don't like reading my magazine on a screen.  I want it in my hand so I can study it closely and share with others easily the things that I find interesting.

Those are my thoughts today on magazines!

Posted by Red Duck Pond"erings" at 8:28 PM No comments:

I blogged not too long ago about sock monkeys.  I have received a lot of great feedback about that subject on facebook and in our Mall.

It has been fun.

This sock monkey came into our Mall not too long ago.  As soon as it arrived it caught my eye.  It scares me somehow.  I may have to buy it and bring it home just so I know where it is at, at all times!  This sock monkey looks like it could get into trouble. 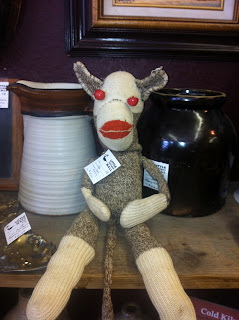 I don't know whether it is the ears, the eyes or even the mouth.
There is something peculiar about this  sock monkey.

A few favorite things this time of year!

I haven't blogged in over a month.  I have several topics lined up to blog about but I need to get my head back into writing and taking pictures.

So to start off I thought I'd just mention a few of my favorite things this time of year!  It is the season for foxglove and I love them.  They come in purple and in white around here.  I find both varieties beautiful and look forward to them every year. 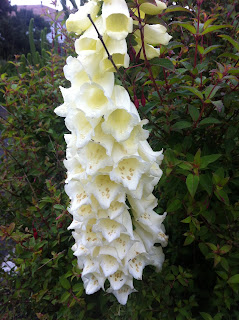 I also love rhododendrons.  Their season is almost over by now.  The rain and wind haven't been kind to the blooms, this year,  but for a day or two things were pretty spectacular around town.  Another favorite of mine. 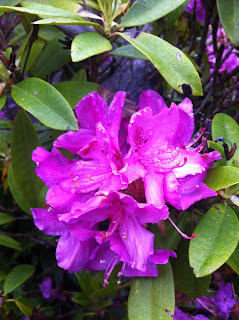 And to top it off I love carrot cake from the Rockfish Bakery which is just few doors south of the Little Antique Mall, Inc.  It is the BEST!  I apologize for this picture.  I always share my piece of carrot cake with my coworkers.  I couldn't help but eat my share before I took this picture.  It is THAT good! 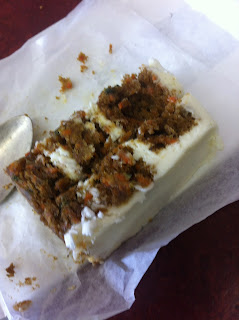 Okay, those are a few of my favorite things right now.  Hopefully this brief blog will get my head back into the blogging game!  Take some time and enjoy the flowers this time of year and to enjoy a good piece of carrot cake!
Posted by Red Duck Pond"erings" at 7:47 PM No comments: